Pa-O Youth Organization is an independent and non-profit organization, which was formed on 4th Dec 1998 by Pa-O people: young men and women from communities struggling for community rights

‘Our Land’ report documents local farmers experiences relating to land confiscation problems, impacts policy and solutions. The research is based in three townships in the Pa-O self-administrative zone in Southern Shan state. These townships are Hsihseng, Hopone, and Pinlaung.

Land is central to life. It is important for all people, and all living and non-living things. Over 70% of the population are framers who depend on their income and sustenance from their land and agriculture. These farmers’ voices, and their problems, are being ignored by the authorities.

Land confiscation is happening in Pa-O self-administrative zone under the guise of ‘state security’ and development and has mostly been confiscated after 1990 and during 2012-2013. Land confiscations mainly involve the military and investors/companies. Land confiscation in Myanmar happened increasingly after the ceasefire process.  The land was confiscated without compensation for the purpose of militarization, and for economic development linked with the peace process. Confiscated landsmostly belong to farmers, who have beenpracticing customary land systems for many generations. When they confiscated the land, they didn’t inform the communities, instead they used force, and ignored the customary land practices. The farmers rights to their land are not protected. Customary practicesare being ignored and farmers are facing many problems as a result.

The impacts of land confiscation:

Because of land confiscation, people struggle to sustain their livelihoods because they cannot access or use their land for agriculture, and some people are forces to relocate completely. At a result of less income, poverty increases, people become unemployed and struggle to make ends meet. Consequently, families often cannot afford to pay for their children’s education, often cannot afford healthcare for the family, and young people frequently must flee to Thailand for work to support their families.

When farmers attempt to reclaim their land, the authorities threaten, pressure and accuse the farmers.

A farmer from Hopone said:

“They come and destroy big machine truck my farm and crops when the crops are ready to pick. We apologized them not to destroy and we explain we have no food to eat. But they don’t understand our feeling and don’t care. We feel so sad. The farmer men and women slept under the big machine to stop destroying land and crop. But, they destroy at night time. We didn’t know exactly why they try to take the land and destroy our crop. We heard that they will use for military shooting zone. Now, they don’t listen us and we are in trouble now, we don’t know what to do.”

The main root cause of the problems:

One of the main root causes of land issues is the mismanagement of land and natural resources by the centralized powers of the government enshrined in the 2008 constitution.

The 2008 constitution states in 37 (a) that the Union is the ultimate owner of all lands and all natural resources above and below ground, above and beneath the water and the atmosphere in the Union. In addition, 37 (b) states that the union will enact necessary laws to supervise the extraction and utilization of all state-owned natural resources by economic forces. The State’s monopoly control of natural resources threatens the agency of local communities and rights to their land. The Land Acquisition Act of 1894 provides that the Government can carry out land acquisitions for a company when the acquisition is ‘likely to prove useful to the public’ (Article 40(1) (b)). This act also notes that the president has wide discretionary powers to make the final decision.

The people who have had their land taken from them do not have their ownership recognized and are denied decision making about their own land. This is even though the local people are crucial for society because they use the land for agriculture to feed the country.

Several land laws enacted in 2012 encourage a capitalist system and attract investors. In the law, land is seen as a commodity to be sold and to be confiscated without good reason. These is no guarantee, or security of customary land tenure.

When communities and farmers try to get their land back, they are often ignored and threatened, so when the case goes before a judge, the farmers almost always lose. The authorities and military are corrupt, and this is one of the main root causes of land issues.

(3)   If unable to return the original land, compensate with current land price.

(6)   People must have the rights to ownership, control and management of land, the rights to benefits the rights to free prior informed of consent. This should be in involved in the peace process fair and genuine political dialogue to build up federal system. 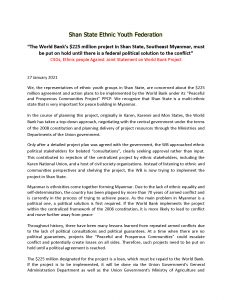 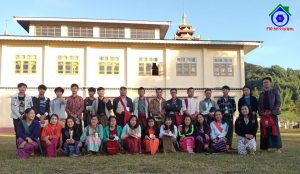 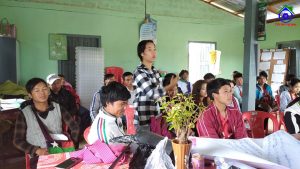